“Fake trade beads.” That is how I heard an artist friend refer to recycled glass beads. There is some truth there in that some recycled glass is made to look like Venetian glass beads. But though the Venetian glass beads that made their way to Africa and were traded for a variety of goods, including slaves (hence, the name “trade beads”) are beautiful, people often don’t understand what they are getting when they covet them.

The slave trade trade involved a triangular system (by which manufactured goods, such as jewelry, guns, liquor, etc., were transported to Africa; African slaves were exchanged for the European imports; slaves transported to the Americas were exchanged for goods produced in the New World (cotton tobacco, sugar, etc., which were then sent back to Europe to begin the process all over again). Though the origin of the jewelry transported to Africa came from many sources, it was the Venetian beads – particularly the millefiori (literally one thousand flowers) that were highly sought in Africa. Given their popularity as well as the object of their destination, these beads came to be known as African Trade Beads (sometimes known as slave beads). But they were not fabricated in Africa. In fact, it is most likely that Venetian glass arrived in Africa as a result of someone having been traded for them – or as a part of a deal that included, slaves as well as other goods.

Don’t get me wrong. I possess “trade beads” and find them beautiful. But I wear them fully conscious that the beads are part of the legacy of the slave trade. Though we may choose to wear clothing made in sweatshops and sold in big box stores because they are a “bargain,” I think we should make conscious choices. Same goes for what we choose to adorn ourselves with.

That’s why I am excited about sandcast, recycled glass beads. Recycled glass, primarily fabricated in West Africa, notably in Ghana, are more affordable, are made from reused materials and provide income to communities that have thrived on this craft which has been handed down to generations for centuries. 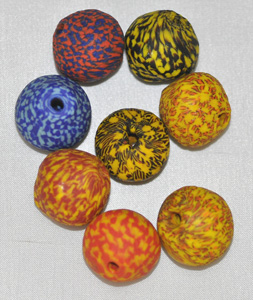 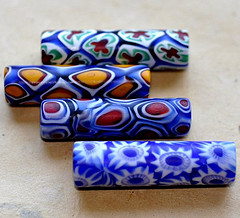 For more on African recycled glass beads and how they are made, see my previous blog post on this subject. You can also find jewelry made with recycled glass on my Etsy site or my Web site.